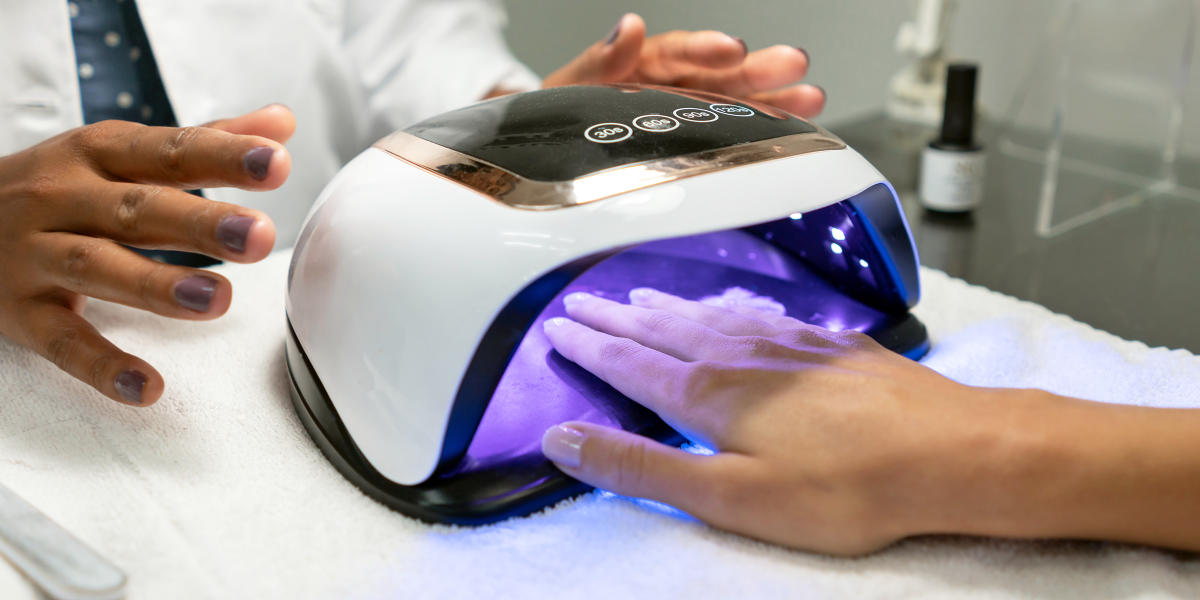 But gel nail polish needs ultraviolet light to cure, raising concerns about the risk of skin cancer when hands, cuticles, and nails are regularly exposed to UV rays that can be more powerful than the sun.

And a new study, published in Nature Communications on Jan. 17, 2023, adds to these concerns, as it found that radiation emitted from UV nail polish dryers can damage DNA and cause mutations in human cells.

Some salons use UV nail lamps to cure the polish; others use LED bulbs. Women may think the LED devices are skipping or minimizing ultraviolet light, but that’s a big misnomer, says Dr. Chris Adigun, a dermatologist in Chapel Hill, North Carolina, who specializes in nail disorders and who has provided expert advice on the safety of gel manicures. for the American Academy of Dermatology.

“Gels, by definition, need UVA exposure to polymerize. So if there is no UVA, there is no gel manicure.”

Here’s the concern: UVA rays are the most mutagenic wavelength range of the UV spectrum, penetrate deeper into the skin than UVB rays and play a role in the development of skin cancer and premature skin aging such as wrinkles and sun spots.

To cure gel nail polish, people place their hand under a lamp that emits UVA rays for 30 seconds to several minutes, depending on the type of device.

LED lights have much shorter curing times, but that’s because the UVA rays they emit are much more intense than regular UV lights or even the sun, Adigun said. They’re so powerful she didn’t know how they would compare to the UV exposure people get from being outside.

When TODAY.com profiled a 21-year-old woman who regularly had gel manicures and discovered she had nail melanoma, a dermatologist called the lamps “like tanning beds for your hands,” though Adigun said they’re a little different since tanning beds use both UVB and UVA rays.

Could a few minutes under a nail lamp increase the risk of skin cancer?

“Theoretically yes, because we know exposure to UVA rays increases your risk of skin cancer, and you have to have UVA exposure to cure a gel manicure,” Adigun noted, adding that there is particular concern about the increase of gel manicure exposure over time. Some women go every two weeks.

The 2023 study in Nature Communications offers new cause for concern. Researchers at the University of California San Diego took three different cell lines – from humans and mice – and exposed them to a UV nail polish dryer. Cell death, damage and DNA mutations were observed after both acute exposure (defined as two 20-minute sessions in one day) and chronic exposure (defined as 20 minutes per day for three days) to the device, researchers reported.

Maria Zhivagui, a postdoctoral scientist and first author of the study, says she no longer gets gel manicures after seeing the results.

“I started using gel manicures regularly for several years,” she explained in a statement. “Once I saw the effect of radiation emitted from the gel polish drying device on cell death and that it mutates cells even after just one 20 minute session, I was surprised. I found this very alarming and decided to stop using it .”

It’s important to remember that this study does not provide direct evidence of an increased risk of cancer in humans, the authors wrote. These are experimental results using in vitro cell line models, which don’t perfectly mimic what happens in real life in humans, so long-term studies are needed, they note.

Still, these findings, along with previous research, “strongly suggest that the radiation emitted by UV nail polish dryers may cause hand cancer and that UV nail polish dryers, similar to tanning beds, may increase the risk of premature skin cancer,” the authors write.

Another concern is that there is no standard for how long hands should be held under the lamp. The devices are not regulated, and each proprietary gel polish has its own lamp and its own recommended curing time, Adigun said.

A salon may or may not follow the recommendations or have the right kind of lamp. There is also an incentive to keep the hands under the light longer.

“As you can imagine, a nail salon client is less likely to complain about a well-cured — possibly over-cured — gel polish manicure than an under-cured manicure,” Adigun noted.

Research is still being done in this area, but since gel manicures are fairly new and it can take decades for skin cancer to develop, the full picture may not be clear for a while.

Long-term exposure to UV nail lamps may increase both the risk of cancer and UV-induced skin aging, a 2013 study found.

A 2014 paper warned that longer exposure times led to a greater likelihood of skin damage, but concluded that the risk of developing cancer was small.

Another paper profiled two women who were regularly exposed to UV nail lamps and developed squamous cell carcinoma on their fingers and hands.

As for nail melanoma, UV exposure was not thought to be a major risk factor since the nail matrix is ​​under the skin. But a 2017 study found that some nail melanomas contain mutations with a UV signature, surprising experts in the field.

“What this is saying is that we just don’t know, and we can’t really conclude with certainty that nail melanoma has nothing to do with UV exposure,” Adigun said.

How to protect yourself:

Adigun stressed that she’s not an “anti-gel,” and you can still get gel manicures as long as you protect your skin.

The best way is to cover your hands and fingers with a piece of clothing with a UPF (ultraviolet protection factor) rating, whether it’s a glove with the ends cut off, a shirt or a scarf, she said. TODAY style editor Bobbie Thomas demonstrated gloves specially designed for this purpose that you can buy.

The American Academy of Dermatology also recommends applying a broad-spectrum sunscreen with an SPF of 30 or higher to your hands before getting a gel manicure. Adigun still preferred a physical covering over sunscreen because it’s not clear how effective sunscreen is at blocking the intense UVA rays emitted by some bulbs.

Keep in mind that there are many medications that can increase your sensitivity to UV light, such as doxycycline, an oral antibiotic. People taking these medications should take extra care to protect their skin during a gel manicure to prevent blistering or burns on their hands.

This article was originally published on TODAY.com