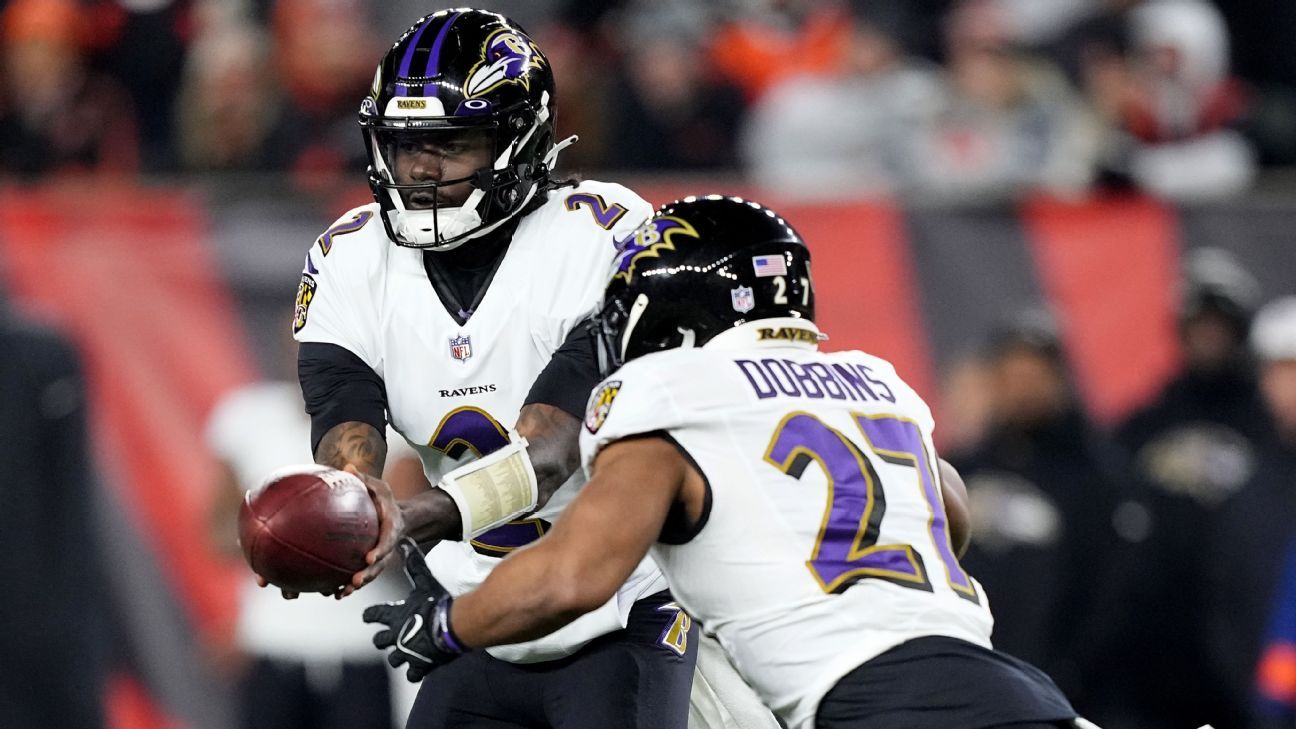 CINCINNATI — An extremely frustrated JK Dobbins said he believes it would have been a different result if the Ravens had given the ball to him — not quarterback Tyler Huntley — during a crucial fourth-quarter play near the goal line in Baltimore’s 24-17 wild card loss to the Cincinnati Bengals on Sunday night.

Huntley made the game’s most critical error when he fumbled with a tied 17, lost the ball on a jump toward the end zone, and got his turnover back 98 yards for a touchdown by Bengals defensive end Sam Hubbard. The Ravens went from being on the verge of taking a touchdown lead to trailing by seven points with 11:39 remaining.

The running back Ravens were upset that he was limited to 62 yards on 13 carries and didn’t get another red zone touch after he worked his way to a 2-yard touchdown in the second quarter. In that critical fourth-quarter series, Baltimore played inside the Bengals’ 3-yard line three times, and Dobbins did not get the ball once.

“I’m a guy who feels like I should be on the field all the time,” said Dobbins. “It’s the playoffs. Why am I not there?”

This isn’t the first time Dobbins has spoken his heart out about his desire to get the ball more. On Friday, he told reporters he wanted the game “on my back”. After Sunday’s loss, Dobbins said he told coaches on the sidelines that he wanted to be more involved.

“I should be the man. I’m tired of holding that back,” said Dobbins, who had averaged 6.9 yards per carry in four games since undergoing knee surgery. “I’m a playmaker. I’m a guy my teammates eat off of me when I’m on the pitch.”

Ravens coach John Harbaugh was asked if there was any discussion about giving the ball to Dobbins or Gus Edwards running back instead of going along with the quarterback sneak.

“We felt like we had a good call; it was a push-sneak play. It wasn’t executed the right way,” Harbaugh said. “Tyler went over the top. That’s a ‘burrow’ game; he has to go low on that. That’s the way the piece was designed. We felt like that was the best decision; we just didn’t get it right executed.”

Many Ravens players said they wouldn’t have thought about whether they would have won if their quarterback had been Lamar Jackson instead of Huntley, who also threw an interception on the opening drive. Jackson missed his sixth straight game with a posterior cruciate ligament sprain in his left knee.

“I just don’t think he was really healthy enough to really go out,” Humphrey said of Jackson. “There was a lot of speculation that he wouldn’t have the contract. I don’t even know if I should say this but he kind of stumbles around the facility. That’s kind of the crazy thing people don’t see. Obviously we knew that he wouldn’t be with us, but hopefully we sign him to a big deal and he’s a Raven with me forever.

Dobbins also made no mention of how much Jackson’s return would have affected Sunday’s playoff game.

“If we had Lamar, we would have won,” said Dobbins.